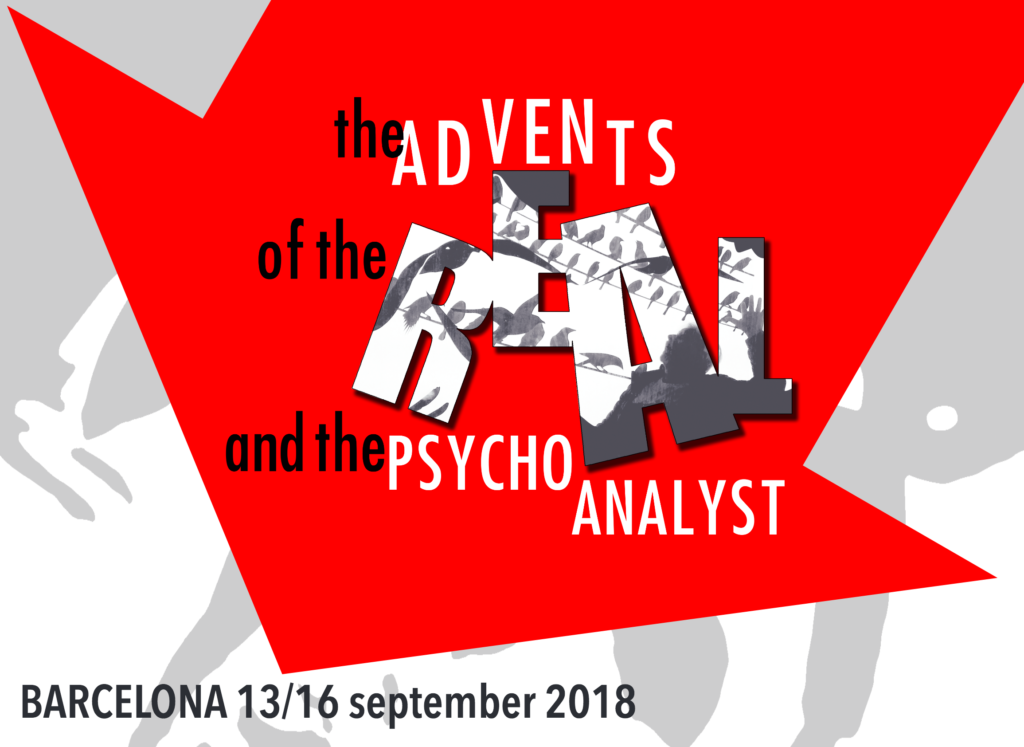 ADVENT OF THE REAL

Colette Soler, Pre-text for the RV in Barcelona in September 2018

I will take advantage of this first pre-text, which the two organisers of the RV 2018 have asked me to write, to reflect on the problematic of the theme that we have chosen.

The word “advent” designates a moment of emergence, a moment of the appearance of something unprecedented, which might be foreseen, for example Louis XIV’s advent to the throne or the advent of a new political regime, or it could also simply be awaited as in the messianic usage, the advent of the saviour or of the end of the world, but it could also happen [advenir] by surprise. For example, isn’t that the case with the advent of Freudianism at the end of the nineteenth century? The nuance there is interesting: we would not speak of the advent of Freud, but of Freudianism, and he was hardly foreseen and even less expected.

So the advent of the real? The common idea, even one received by Lacanian transmission, is not that the real can happen [advenir]. Rather, isn’t it thought of as impossible to avoid for speaking beings who are moulded by the imaginary and the symbolic. The definition, “impossible to avoid”, as broad as it is, already divides the real into two parts. On one side, there is the real that owes nothing to the symbolic, a Tsunami, for example, and the sex ratio about which Lacan was so emphatic, are of that order, generally speaking, that of the real of nature or of life. But “impossible to avoid” is not reducible to that for on the other side there is also destiny – this is the word used in our civilisation for the impossible to avoid – that language makes us.

Since always we have defined it in terms of mis-fortune [mal-heur], impotence and impossibility, and we have imputed it to the gods and to sin. Lacan himself recognised in it the effect of the structure of language on the living being, what I have called the negativities of the structure. But this is to forget that the gaps introduced into the speaking being by language are great due to something completely different from this curse: all the possibilities of invention and creation that we have for a long time subsumed under the term “sublimation” and which humanity takes glory in. From the time of “On a question prior to any possible treatment of psychosis”, Lacan was saying nothing other than “the function of derealisation is not entirely located in the symbol”.1

Now when he employs the expression “advent of the real” – he does not say “of real” or “of reals” – in both Television and “La troisième”, he speaks about the effects of science. The moon landing on the one hand, and on the other, the production of novelties of surplus jouissance conditioned by science under capitalism. We are certainly in the problematic of human fecundity, of its capacity to make the new happen [advenir], to change being and its entourage jointly and at the same time. Certainly, today we are no longer so sure that this capacity is synonymous with progress, as was the case with the enthusiasm of the Enlightenment in the 18th century, and also with the expectation of the “new man” of the 19th century. Today, history has shown the dark face and the lawlessness of this fecundity. Lacan, always up to date, indubitably touches its effects … biopolitical for the collective, beyond the specifically individual effects that psychoanalysis treats. This was already being questioned at the end of Seminar XI: what will happen when the whole book of science is eaten? Without doubt, the final chapter is not yet written, but we can do no less than to take up the question in Barcelona in 2018.

This will only be one aspect of our theme, for we will have to also ask
ourselves how this real that makes our unconscious – destiny, as it was called for so long – happens [advient] for each of us. Will we speak of an advent of destiny, of a curse in its darkest form? That is the question. The two terms appear to be in contradiction, since advent is event, while destiny is spoken of in terms of “it was “written”. And in fact, it is experienced as something to be endured. For the main part, repetition and symptom, two Freudian notions, are those where Lacan reads the two major effects of the language-unconscious, namely the inexorable missed encounter, and the unmoveable fixation of jouissance and of these conditions.

Advent of repetition, then? Yes, since repetition is less automaton than tuchè. It needs the accidental encounter that comes at the whim of life’s events, in order for the law of the missed encounter to appear [advenir] as necessary, as what does not cease. Appear [Advienne] through what motivates it: the insistence of the signifiers of the unconscious. I recalled the 1955 text, saying that the function of derealisation of the symbol is not all, but I left in suspension the rest of the sentence, which said, speaking of the symbol: “For in order for irruption in the real to be incontrovertible, the symbol need but present itself, as it commonly does, in the form of a broken chain”.2 And Lacan wanted it to prove nothing less than the words of love at the approach of the partner thing. In Television, almost twenty years later, he will say “good fortune” [bon heur],3 “the subject is happy [heureux], that’s its definition”, ironic. It is always the happiness [heur] of repetition. In the interim Lacan produced the unconscious as knowledge [savoir], made of enjoyed-signifiers [signifiants-jouis] the insistence of which, in the approach to the Other, is indeed an advent of the real, that of “there is no sexual relation”.

As for the advent of the real in the symptom, we can see it in its nascent state in phobia, this first signifier that is excepted from the signifiers of demand coming from the Other. Hans’s signifier, the horse, is not an object – Lacan hammered it enough – but it is not an offer from the Other either, it is properly speaking an advent, an invention, the here-it-is-again invention, of a signifier that “incarnates” the jouissance of the “traumatic penis”.4 It guarantees a first coalescence of jouissance and the signifier. And for Lacan to say that Freud invented the unconscious – the unconscious that he deciphers in signifiers – based on the discovery that certain beings have in their encounter with their own erection,5 starting with the first traumatic enjoyment that the phobia raises to the signifier by using some imaginary elements of perception. It is very exactly the advent of the ciphering of jouissance, for the infantile phobias disappear but the ciphering, that is, the substitution, continues from dream to lapsus, in the said formations of the unconscious.

The “fixions” of the jouissance of the symptom remain. They are less
ephemeral, where the cipher appears [advient] as letter, the only one to be identical to itself, namely outside the chain and non-substitutable, thus an exception. Their advent is without law, contingent, being excepted from the programs of the discourse of the Other and this is, if we believe Lacan, what LOM6 – which he writes in three letters and who is made between the symbolic and the imaginary – has that is most real.

In all the cases where there is an advent of the real, whatever this might be for the collective or for the individual, it is a product of this strange capacity LOM has to make everything into language, from the mysteries of a nature that go beyond him and that science seeks to master, as much as from the jouissance thing that embraces him in the particular of cases and that is precisely the motor of languages [langues] in constant evolution. The psychoanalyst makes use of it, but to what end?